In the third in our series on rates for coaching and supervision, Sebastian Fox researches rates and practices.
Part 3: What should we charge for a team coaching engagement?

Following on from Clare Norman and Michelle Lucas’ recent article looking at fees for one-to-one coaching, in this article I will look at the different rates and practices charged in team coaching interventions.

The aim is to help inform team coaches in thinking about what they should consider when discussing a new team coaching engagement. A starting point is to recognise the situation is complicated by lack of a standard definition of what constitutes ‘team coaching’ (Lawrence & Whyte, 2017). The International Coach Federation (ICF) has recently published team coaching competencies which, while it does not give a specific definition, offers a clarification of team coaching being “an experience that allows a team to work towards sustainable results and ongoing development” (ICF, 2020, p1). This team competency framework distinguishes team coaching from other team interventions such as training, consulting or mentoring and sets out different ‘team development modalities’.

This article focuses on team coaching as an intervention that works with the team’s dynamics, and is understood to mean “partnering with a team to unleash its power, purpose and potential to connect and collaborate” (Woudstra, 2021, p39). While the definition is narrower than some, this was a deliberate decision made at the outset of the survey to establish some common understanding of the basis of the work being researched. In particular, there’s a distinction drawn between one-off interventions such as training and team building, and longer ones including mentoring, consulting and facilitation which could be considered similar to team coaching in terms of their duration. The ICF explicitly states that it might expect a team coach to move along the continuum of different modalities during a team coaching programme (ICF, 2020). This does nothing to help clarify the distinctiveness of team coaching and further complicates matters, as many clients’ reference point for fees might be from team building or team training interventions.

The previous article mentioned a paucity of research for one-to-one coaching. There seems to be even less research available for team coaching rates: the ICF, Association for Coaching and European Mentoring & Coaching Council all confirmed they have no data at all, nor does any independent research appear to have been carried out. Of course, this is partly because team coaching is only emerging slowly as a separate discipline to one-to-one coaching and there’s limited literature on the whole area (Widdowson et al, 2020). Nonetheless, with an increasing number of trained team coaches and a growing interest in how team coaching can help teams perform better, now is a good time to address the question of what is an appropriate rate to charge for team coaching. Anecdotal evidence suggests that deciding what to charge is one of the more taxing questions for newly qualified team coaches.

To help inform the answers to this challenging question, and in the absence of any literature or established sources, research was carried out among team coaches in late 2020. Some 33 respondents from the UK, Europe, North America, Australia and South Africa completed an online survey on how much they charge for their services. To try and ensure consistency in comparing different rates charged, only team coaches with some formal team coaching qualification were included, recognising nonetheless that as with one-to-one coaching, there’s a wide range of practices depending on coaches’ philosophy, stance and training. However, it meant that respondents were principally coaches who operate in the team coaching space working with the team’s dynamics.

The results revealed – as might be expected – a wide range of fees and practices. Key findings include:

It was evident from the responses that the variables taken into account comprise two different types.

On the one hand are the more objective factors such as the estimated time needed for the coaching sessions, preparation time, size of team, frequency and number of sessions, type of organisation, sector and daily rate. On the other, the more intangible factors including the ‘social value’, alignment to the coach’s values, affordability and readiness of the team to be coached.

The length of time practising as a team coach, type of qualification or coaching ‘model’ used don’t appear to be strongly linked to the daily fees charged after a year or so of qualification. It’s the coach’s choice of sectors or type of client organisation that have a significant impact. Some coaches also reported taking into account how ‘socially valuable’ they felt the work to be and flexing their rates accordingly. Typically, as expected, the rates charged for work with not-for-profit/charities and public sector/government were lower – sometimes considerably so – than fees charged when working with private enterprises.

Once these variables are taken into account, the majority of respondents charged by project or daily rate (though it’s worth noting that team coaches charging by project usually did so by reference to a notional daily rate).

The amounts charged for a project range from £15,000 upwards (to £50,000 or more in some cases). Within the fees charged, there’s typically a range of ‘add-ons’ such as a diagnostic (or number of diagnostics) and of particular importance within the project is whether one-to-one coaching is included. The fees charged for one-to-one coaching usually form a significant element of the overall fees for a programme and thus most team coaches will do both in order to make the work viable. Worth noting is that the diagnostics might also constitute a significant piece of work, involving not just the diagnostic survey but interviews with both the team members and the team’s key stakeholders. A respondent summarised their variables as:

“Usually, I have a basic day rate in mind but further considerations include length and size of assignment, organisational level of the audience, a sense of how ‘ready’ the audience are for team coaching and therefore how much resistance I’m likely to face/ how much effort will probably be required to position, the market and how I sell the process and its benefits to the target audience.”

In spite of the overall headline rate for a project appearing attractive, the rates charged for team coaching sessions tend to be less in aggregate than what would be charged for an equivalent amount of time spent one-to-one coaching. Where project fees are quoted towards the higher end of the range, this is likely to be due to a significant element of one-to-one coaching included in the scope of work.

When charging daily rates, practice varies considerably, with the actual rates charged starting at £400 (or sometimes less, for long-term contracts) going up to over £4,000. Respondents were split equally between those who charge between £400 and £1,200 per day and those charging over £2,000. The main determinant is, again, the sector and type of client with £500-£800 per hour the norm for public sector and not-for-profit), and £2,000 upwards for small/medium enterprises and larger corporates. One coach described their thinking process thus: “I consider on- and off-line involvement; the value to the client balanced with the cost of ‘not doing anything’ as well as the likely affordability of the client.”

Very few of the survey respondents charge hourly rates. Where these were mentioned, they ranged from £60 to £250, but in these cases their notional hourly rates are aggregated to charge a daily rate. Although many of the respondents work for themselves, a few reported the rates they receive working as associates of larger organisations from £800 to £2,000 per day.

One perhaps surprising feature arising from the data is that the amount of experience didn’t seem to affect the rates greatly. Team coaches with up to three years’ experience charge similar daily rates to those with up to ten years, the main variables of the actual rate being the client type and sector. This might be because coaches quickly reach what they consider to be a natural ‘ceiling’ for the fees they can charge.

Where experience does play a potential role in the rates appears to be when charging by project. More experienced team coaches tend to charge more often on a project basis, perhaps because they have a better understanding of what’s involved or what they can charge for within the overall project fee. Team coaches with up to three years’ experience report projects starting at £10,000 and those with six years or more £50,000 upwards.

When deciding what to charge for team coaching, there are some similar variables to one-to-one coaching:

Conversely, other factors which are important in determining the rate in one-to-one coaching seem less relevant when it comes to team coaching:

There may, of course, be other personal factors, which are important to an individual team coach in informing their rates. But, from a broad perspective, what should you consider when trying to decide what to charge for a team coaching engagement?

This research has highlighted some of the key variables and questions team coaches could consider but doesn’t seek to provide a definitive answer to what they should charge. However, by setting out what coaches working across different sectors, locations and with varying experience charge, potential guidelines have emerged. All team coaches, whether highly experienced or newly qualified, may be able to use the data and questions posed to challenge or re-examine their own thinking on what they charge and how that compares with other team coaches. As one respondent says:

“[I decide what to charge] with difficulty and depending if I have worked with the client before and they know my reliability. I work out a rough number of workshops (now c. 3 hour zoom sessions) and charge for a day, which includes the preparation. I might charge 2 days to do the upfront contracting and initial inquiry with team members (depending on number of team members).” 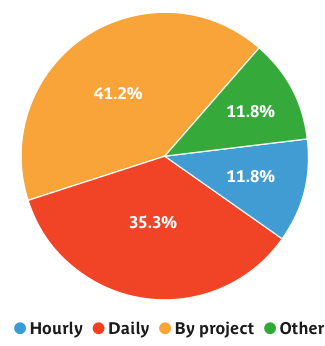 How do you charge for your work?
33 responses