Which key issues are we and our clients facing as the workplace evolves? Carol Whitaker and Kerstin Potter share their research and recent enquiries with colleagues into the future of coaching

Coping with working from home and hybrid work, the resignation/ talent crisis, managing remote/hybrid teams, mental health and isolation, and burnout – these are five of the top issues we identified in our research.

The other two top issues were increasing diversity and inclusion, and creating psychological safety.

We identified these key seven trends from carrying out desk research during the first two years of the pandemic. 2020 / 2021, including trawling through newspapers and specialist journal articles covering the issues that people are facing.

We were interested in understanding if these issues are indeed what the clients of coaches, supervisors, mentors and facilitators are experiencing ‘on the ground’. In addition, we wanted to identify any new issues experienced by the practitioners themselves.

As we know, the Covid-19 pandemic has led to drastic and rapid changes in working and living conditions – in some cases accelerating previous trends.

From a technology standpoint, for example, it’s been possible to work from home or on the move for about 20 years. However, this has mostly only been possible for knowledge workers and creatives. Currently, the debate around how far to embrace working from home (WFH) continues to rage. Some leaders declare that ‘employees should be at their desks, or take a pay cut’, others that two days in the office and three days a week working from home is best, or the other way around.

There’s also a UK six-month trial with employees spending four days working instead of five, still for the same pay. How will productivity be impacted? And what about the impact in terms of the growing divide between those who can easily work from home and those who physically need to be at their place of work?

Pre-pandemic, even as far back as 2015, we’d already started to see clients questioning the purpose of their jobs, particularly those in their first jobs and who had worked for three to five years. We’d also seen a rise in the search for freedom, flexibility and reward through the Gig economy, which arguably started with the economic crisis in 2008. Disappointment with this movement had already set in before the pandemic, as the reward part of the equation was mostly lacking.

As we’ve seen, this disappointment has been heightened for many by lockdowns, with older generations joining younger generations in questioning work experiences and conditions.

At the end of January this year (2022), we sent out a short survey with multiple choice and open questions to our international networks of contacts. We received 110 completed surveys (44% response rate). The majority were from Europe but the spread included Australia, New Zealand, Asia, the Middle East, the US and Canada. We were surprised by the high number of comments in response to the open questions, suggesting great interest in the subject.

We presented our findings at the European Mentoring and Coaching Council (EMCC) global conference in June, where we collected more comments and initiated a discussion on the future of coaching in view of the changing world around us.

The vast majority (99.7%) of our respondents’ clients are facing the issues listed in newspapers and articles (see Figure 1).

In a sample of 110, there’s little difference between ‘Coping with the resignation / talent crises at 12% and the top theme at 18% and we believe that all of these are of importance in the workplace today.

We asked if our respondents had come across other issues in sessions with their clients and these were mentioned, although none of them reached more than a couple of percentage points. They were: 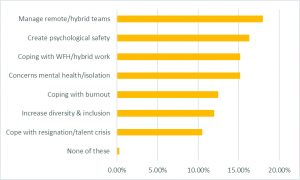 Worries about working well online and generally working in the digital world are at the forefront of new issues faced by the respondents themselves. However, nearly as many say that they are doing well, even enjoying the challenges. It appears that those who’d started developing the skills of online working before the pandemic were the ones seeing an uplift in results.

Other issues mirror those faced by their clients: how to be more agile, cope with multiple roles as well as feelings of uncertainty, dread, and anxiety.

From a wider viewpoint, it is felt that a coaching approach is needed, even necessary, in this chaotic world.

Ideas for the future

We believe that now is a time for experimentation and feedback. What works best for your organisation, your employees, and your stakeholders?

In addition, there’s a re-think of what leadership and management should look like. What are the roles of leaders and middle managers in a world where some work can take place anywhere, for example?

Feedback is important here, together with diversity and inclusion: are you and your clients making sure that all your stakeholders are listened to?

In our view, the pandemic accelerated online coaching and the development of digital platforms. The growth of group / team coaching with a systemic and organisational focus is also speeding up.

During our EMCC presentation, we started exploring the future of coaching with EMCC colleagues using Lephorus® Visual Metaphors at Work®® to open up the discussion. Lephorus® is a methodology using carefully crafted questions and selected images to rapidly prompt thoughts and ideas independent of language and cultural background. The images provide a risk-free way to express gut feel and sometimes difficult to articulate insights.

We offered a choice between eight different images.

To establish a baseline, we started by asking colleagues to select an abstract image that represented their experience of coaching today. The view of the group was summarised by the two images below: 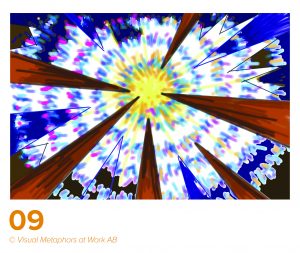 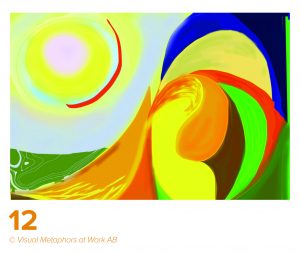 The two aspects of coaching today that came to the fore concern a nearly laser-like focus on getting to the point of the issue, as well as the joy of exploration and a certain gentleness of the process.

Then we asked the participants to select an image that represented how coaching could be in the future. 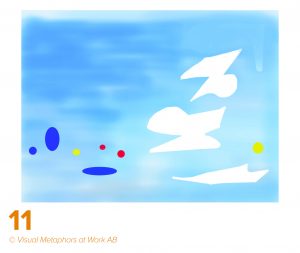 One image was selected:

Here, participants articulated the importance of taking account of the whole system – the wider context – whilst maintaining a clear focus on the issue of the client.

Our third question, using a set of eight images of different natural patterns: is there an image representing how we make this change? 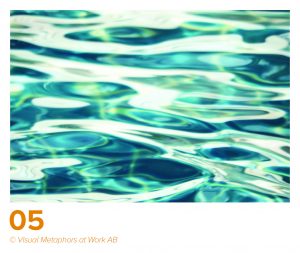 We used Lephorus® for this discussion as we were looking for a ‘reflection-in-action’ output.

This is what one participant said:

Reflecting on the last image chosen, and the implication of passivity and going with the flow, we became aware of possible unintended consequences in the process of moving to the coaching of tomorrow and the need to explore them. Digitisation of coaching will bring opportunities to make coaching/mentoring / supervision more accessible to a wider group of people. But is the result going to be too process-driven, losing the human touch? Are there ethical issues?

How are coaches, mentors, and supervisors going to upskill themselves in terms of digitisation? Are training organisations equipped to do this? Should professional bodies be involved, and if so, to what extent?

Is the current Western-biased model of coaching, mentoring, and supervision still appropriate? Does it need to be more inclusive of other cultures? How do we upskill in this? What should the involvement or responsibility of companies buying coaching services be?

We’d like to see more studies and trials to help highlight key issues as the workplace evolves, and where we as practitioners need to adapt and update our practices.