A few years ago, one of the authors, Eve Turner, was asked for advice by a supervisee who had been asked by the police to hand over their coaching notes on a client (Turner & Woods, ‘When the police come knocking’, Coaching at Work 10.6, 2015).

The subsequent weeks involved discussions with professional insurers, lawyers, professional bodies, Turner’s supervisor of supervision and stakeholders, with a raft of recommendations being issued. It became clear that there had hitherto been limited discussions of this nature within the coaching field. As a result, a more ambitious global research project has emerged, to look more widely at coaching supervisors’ practices when ethical dilemmas and/or tricky dilemmas were brought to supervision.

As we know from our practice, coaching conversations can vary from individual work to teams, groups and internal or external. Similarly, the sessions can explore issues of identity, morality and personal dilemmas as well as goals, improvements in performance, wellbeing and interpersonal relationships.

So how do coaches make decisions when presented with issues that press against the boundaries of their experience, values, ethical codes, agreements made and national law? And how far can supervision, legislation, values or professional ethical codes help coaches navigate their ways through these tricky cases?

There has been relatively little research in the area of ethics in coaching and supervision with relatively few books, chapters and articles. Exceptions include: Duffy & Passmore (2010); Lane (2011); Hodge (2013); Hawkins & Smith (2013) and Iordanou, Hawley & Iordanou (2017).

In contrast, ethics has played an increasingly important role in parallel areas of practice such as counselling, psychology and business. This may reflect coaching’s relatively new status as a profession, a lack of barriers to entry and lack of regulation.

Supervision has been widely viewed as a means by which coaches can protect themselves, providing some form of protection to clients in an unregulated environment (Hawkins & Schwenk, 2006). More recent work (Turner & Hawkins, 2016) has shown that more coaches reported their use of supervision, but that global practice varied widely.

This reflects leading professional coaching bodies embedding supervision into their membership practices. The Global Code of Ethics, which includes the AC and EMCC as signatories, states: “Members will engage in supervision with a suitably qualified supervisor or peer supervision group.”

More recently, the largest coaching professional body, the ICF, strengthened its position on supervision, actively recommending it as a method of reflective practice, while not requiring it (ICF, 2017a).

Research into ethical dilemmas and tricky decision-making began with an online, international survey of 101 coaching supervisors (see Table 1), with the results summarised here. Results from the next stages involving indepth interviews with supervisors and representatives from professional bodies will appear in later articles.

Supervisors, drawn mainly from the Global Supervisors’ Network1 were asked questions that covered factors in making decisions, including referring to codes of ethics, contracts and coaches’ values; when to involve outside bodies such as the police, professional bodies and insurers; what duties of care are and to whom, with space for written-in comments.

Some 62% of supervisors said they either consistently encouraged their coaches to consider their personal values when discussing a tricky decision or dilemma or did so with some supervisees. However, 20.79% of supervisors never spoke about the role of values in decision-making.

Only 8% suggested this was not a factor that they asked coaches to explicitly refer to when making such decisions. Some 24.75% suggested it was a possible factor to consider, but that it depended on the circumstances.

As with ethical codes, it would be almost impossible to define and specify every eventuality within a commercial contract.

Just under 10% of the supervisors had spoken with, or encouraged, their coaches to speak with their insurers, to gauge the position under their Professional Indemnity Insurance (PII) cover (not available in all countries). A large portion, 81%, said their advice would be dependent on the circumstances, and as yet they hadn’t felt the need to give that advice. This may illustrate how few coaches and coaching supervisors understand the nature of PII cover, which can include a free legal helpline.

If a supervisee didn’t follow instruction and broke the law, 20% of supervisors would report their client to the police in all cases of illegality, while for 62% this would depending on the circumstances (Figure 3). That left 18% who claimed they would not report
any act.

The Global Code of Ethics (2016) states: “Members will have a clear agreement with clients and sponsors about the conditions under which confidentiality will not be maintained.”

The ICF places a similar responsibility on its members about “the conditions under which confidentiality may not be maintained, which also includes illegal activity and court order/subpoena”.

Members are told to “make sure both client and sponsor, student, mentee or supervisee voluntarily and knowingly agree in writing to that limit of confidentiality”, and of the possibility that the appropriate authorities may need to be informed (ICF, 2017b).

The results shared above and in Figures 1-4 raise serious issues for coaches and professional bodies. In some circumstances, such a position could prove dangerous and open supervisors and coaches to breaking the law where mandatory reporting is required. Such cases are likely to be extremely rare, but a failure to act could even result in a custodial sentence for the supervisor or coach.

Responses demonstrated that for many supervisors the issue of building and breaking trust presents its own dilemma:

When it came to reporting illegal acts to professional bodies (Figure 4), 27% of supervisors said they would report all failures to the professional body, however, 50% felt it would depend on the circumstances, with 30% saying they would do so in mandatory reporting situations or serious criminal acts, and 20% in the case of mandatory situations only. Some 23% felt it was not their obligation.

The nuances are shown in these comments:

Other factors to consider Supervisor comments suggested the importance of checking assumptions and facts, considering questions including:

The challenge and need to avoid simplistic solutions is noted:

Supervisors found the questions “thought-provoking”, with one, a UK-based female supervisor, saying: “There has been a need for well over 16 years for all these questions to be asked.”

Another, a US/Canada-based female supervisor, wondered: “What structures do we need in place to support and ensure ethical and lawful practice?”

To achieve greater and continually evolving ethical awareness there are implications that touch training and CPD for both coaches and supervisors.

The territory includes contracting, understanding of professional codes of ethics, understanding around the role and potential value of PII, and the role and value of supervision and of reflective practice more generally as tools to support the continued development of situational and self-awareness in our practice.

Some training programmes concentrate on models, techniques and relationships. Ethics could be used as a central, continuous developmental strand, with Ethical Codes of Practice a starting, rather than end, point:

“The focus…should be cast not on solving ethical issues but, rather on creating those conditions and conversations that will bring them to the surface” (Iordanou et al, 2017, p186).

Contracting has been an under-researched area in coach practice, yet the results indicate that contracts are one of the key resources that individuals turn to when seeking to understand how to navigate through a tricky dilemma.

More attention on this in both training and via the professional bodies (the EMCC provides a sample contract) could help.

The professional bodies are now paying more attention to this area, with the ICF including an online ethics course for credentialing and with other bodies using ethical scenarios for accreditation. More activity in 2017 has included a review of the Global Code of Ethics (AC, EMCC), an exploration of ethical guidelines for supervision (AC, AOCS) and the launch of an EMCC survey into ethics for a planned ‘EMCC International Provocations Report’ (EMCC, 2017). This is welcome and in part may reflect a response to research we have been conducting in 2016-17.

Additional elements could include compulsory ethics training for professional body membership/accreditation, wider use of ethics hotlines (ICF, 2017, c), and more workshops and training for CPD in this area using case studies and real examples to make ethics come alive, for example, on confidentiality. 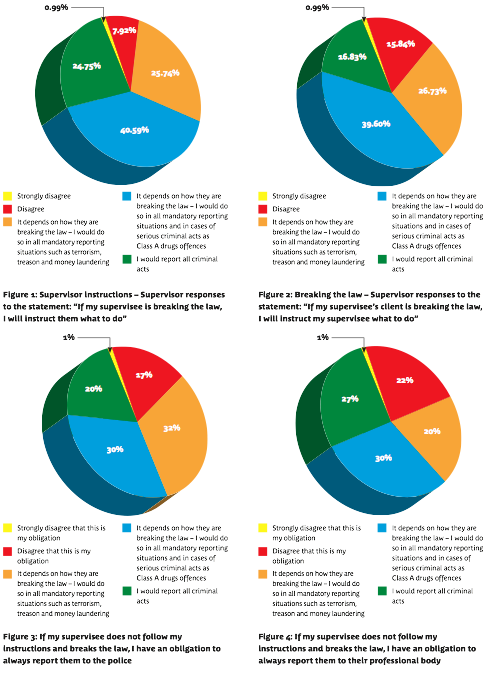